This report is a component of the main report of the Uganda National Panel Survey (UNPS) conducted by the Uganda Bureau of Statistics (UBOS). The overall objective of the panel survey is to collect high-quality data on key outcome indicators such as poverty, service delivery, governance, nutrition and employment among others; to monitor the Government’s development programmes.

Early initiation of breastfeeding from 83.5% to 81.7% and bottle feeding declined from 15.4%. Only, 11.4% of children received the required minimum dietary diversity and 53.8% received the required meal frequency. Consequently, the proportion of infants/children that meet minimum acceptable diet was a mere 8.0% in 2018/19. Among women of reproductive age (15-49 years) only 11% met the minimum dietary diversity.  Vitamin A supplementation coverage was up to 75.8% of children and 5 in 10 of children between 12-59 months were dewormed.

Nutrition in education and sports

Nutrition in water, hygiene and sanitation 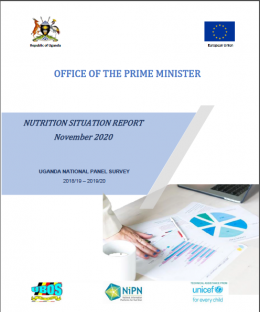 This report is a component of the main report of the Uganda National Panel Survey (UNPS) conducted by the...